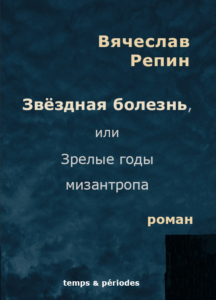 The Stars’ Sickness or the Ripe Years of a Misanthrope

The novel was written in France between 1990 and 1998 et was a major surprise for the critics. It was unusually wide-ranging (130 chapters, 1 200 pages), looked at the inner reality of the Russian culture from an unexpected distance, and, furthermore, was entirely at odds with the postmodernists who were then widely popular in Russia.

The Moscow literature magazine «Novy Mir» was the first reader of the manuscript written in Russian. However the project of publishing was stopped. Even in a short version the text was too huge for a magazine’s publishing. Besides, shortening the manuscript was to the detriment of the narration. The editors of the main literary magazines of Russia were unanimous: for the moment it did not exist in Russia’s contemporary literature equivalent texts to «The Stars’ Sickness» in its writing and its opening on the outer world; the novel had to be published without delay in its integral version.

One of the most important Publisher House in Russia, Terra Publisher, decided to publish the book in autumn 1998. The publication was delayed because of the default of 17th August in Russia. The book appeared only in January 1999.

The novel includes 4 parts, a prologue, an epilogue and a diary of the principal character. The main theme is formed by three narrative lines. The story of the life of a French  lawyer with Russian lineage. The destiny of a French  middle-class family. The juridical case of an ex-legionnaire which reflects the social situation in France and in Western Europe today. The action takes place in France, Russia, United States and Africa. Written in a classical and realist manner, the novel talks about the eternal existential problems in the context of the contemporary world, which at the end of the century  are quite as vital as before.

The Russian critic treated the book with enthusiasm and some contradiction, partly surprised by the rupture of the author of «The Stars’ Sickness» with the dominating conjecture of today’s Russian literature, partly offended by the fact that a book of that quality was written out of Russia.
The novel has been chosen to figure in the competition for the Russian Booker Prize.

The first Russian edition of  ‘The Stars’ Sickness…’ was published by Terra Publisher, 1999, Moscow, (paper version).

‘The Stars’ Sickness…’ has not yet been translated into English.

I shall begin with what normally people finish – from the main accent: we have possibly before us one of the most interesting text and most important work of these last years.

Written in a genre, a tone, and from a corner which requires the existance of truth and prefers to ignore paradoxes, the book is thoroughly paradoxical. First because this contemporary novel tends to ignore acceptance, methods and styles of thinking characteristic of the literature of twentieth age… That novel with a russian motif, nearly demonstratively affiliated with the “greater” russian classicist – where deeper, serious, than cans be in actual stylisations, remakes or beside “local literators-patriots” – was created not in Russia. This would be at last not so significant: the author is russian, and emigration is not a schisme… If it was not that well-marked feeling, pursuing with the first reading pages: as once in Russia today there is nobody for writing such sort of texts, there is no context to permit it, but main – there is no matter able to produce anything comparable.

Viatcheslav Repin is thirty nine years old. He lives fourteen years in France, in Paris, moreover far from the russian emigration ambience. Its literary fate in Russia forms not on the accustomed scenario. Viatcheslav Repin did not pass these detours in thick journals, that   are common for a writer of nonprofit direction. Excepting one excellent shortstory, “The last hunt of Petr Andreitch”, which was published first in the almanac “Drugie Berega”, then reprinted by the journal “Moskva”. But “The star’s disease” – his first novel, he contrived to publish it at Terra Publishing House, moreover in the collection “Elected”, where, it seems, till now were published only monuments of great literature, already on over and over again published. It may be even a suspicion that Terra in first once worked from a manuscript.
(…)
Repin can express exactly, pictorially anything: the night traffic on the alpine serpentine road, the Peredelkino’s datchas in winter, the especial sound of footsteps on leaves fallen on the ground of the nude autumnal wood – this highly suborned me in his “Last hunt…”, – the waitress in a parisian restaurant, the riot in jail, mad people… He can, without playing an intellectual, as between times say really deep, original judgements. Only scene, connected with sex, look not ah that, however, no wonder, since be suspicions in general насчет изложимости given themes on normative russian. It is necessary to mention the rare in our time, lucky for the scale novelist grant, which Repine certainly possesses – the ability to carry in himself many and many most different people.
(…)
“The Star’s Sickness” is a massive work. Compared to it, the extensive writings of these last years in Russia (“Underground” from Makanin, “Round Dance” from Utkin, the heap of words of the philologist Prorokov “VGA” from the last Booker list) look average narratives, and the usual “average russian” format – a shortstory.

The novel presents an interpretation of the fate of a well-to-do frenchman of russian origin and can be read as a story on the arousing of russian shelters in the protagonist, after what inevitably follows a deep internal conflict with the valuables system of the west society. Probably, the author had also intention to oppose the West to the orthodox idea that every thing is dead without the faith. What is significant: The West is nowhere difamed. Repine – and this ranges me definitly to his side – is absolutely not an ideologue.
(…)
It is a pity that this world outlook is lost in Russia. Bad that it does not stay anywhere to put labours to make it return.