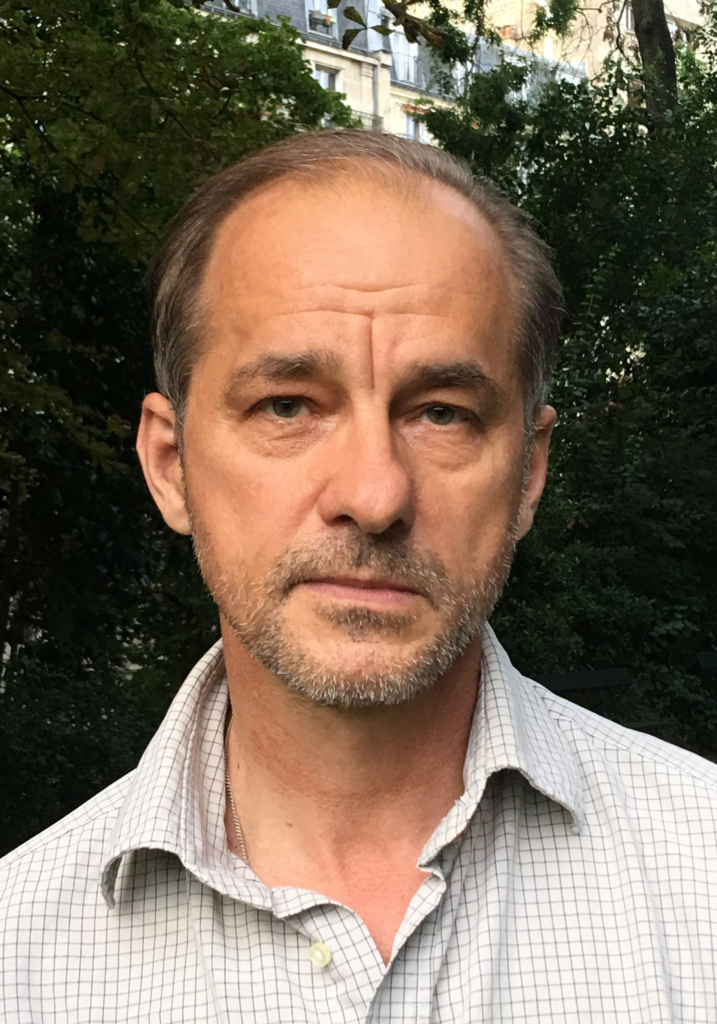 French, of Russian extraction, lives in France since 1985. Writes in French and Russian.

Born in Siberia (Tomsk), into a family of Soviet Army officier. During his university studies in languages in the Soviet Union he was persecuted for his political opinions. In 1985 he was asked to leave the USSR within 48 hours, as a consequence of diplomatic talks on a gaz contract concluded at the time between France and the Soviet Union, and of vigorous press campaigns in his favour launched by the French media.

Some time went by before he was noticed as a writer, his exile being the main cause of this temporary anonymity. One of his short stories, The last hunting outing of Ivan Andreevich, was eventually published in Russia at the end of the 90s in several thick literary journals, and noticed by the critics for its ‘touchy’ subject.

His first novel, The Stars’ Sickness or the Ripe Years of a Misanthrope (1998), written in France and published in Russia by a famous publishing house Terra Publisher, was a major surprise for the critics: it was unusually wide-ranging (130 chapters, 1200 pages), looked at the inner reality of the Russian culture from an unexpected distance, and, furthermore, was entirely at odds with the postmodernists who were then widely popular in Russia.

Among his numerous short stories and novellas, Jean et Jacques and Le Centre du monde are worth a particular mention, as well as existential tales for adults, some of which were published in French.

His novel Antigonia, written in French, appeared in France, and later in Russia in a different version, written by the author himself in his native language.
His first two novels were nominated for most of the major literary prizes in Russia.

His last novel of scope, The Chameleons, written in Russian over more than five years, is currently being translated into French. This is a major and important text of over 900 pages, dealing with today’s Russia, with war, with the Chechen question, among other issues, in the face of existential problems of our (and indeed any) age. Written in a seemingly classical and realist style typical of the author, it takes up eternal themes, whose scope puts the author among writers of universal reach – those who explore the human condition with the greatest care and compassion.

Viatcheslav Repin’s works give the reader a free and sincere outlook at a literature that strives to find an answer to the great questions of our time: the kind of literature that is less and less available to the mass audience in Russia and elsewhere in the world (allegedly because the mass audience is not asking for it), and which consequently requires genuine engagement on the part of the writer.

Viatcheslav Repin has been one of the first writers to bring the spirit of post-industrial literary culture to the Russian literature of the recent years, for the former was largely ignorant of it. His prose is contemporary, distinguished by a critical outlook, open to the outside world, yet paradoxically located within the context. This position is an unprecedented position in literature and this is why the author has been ‘uncatalogued’ as an outsider by the literary establishment in Russia and elsewhere.

a word from the author

“Most people think that to write means to enjoy an exceptional life, to enjoy freedom and ceaseless inspiration. What a privilege it seems to be! In reality, writing is a constant and arduous work, which is never duly rewarded. Because it is about putting right what can be put right, because it is about facing one’s own imperfection – to say nothing of facing the imperfection of the world, which, as we know, is a closed universe, which does no particularly enjoy being dissected. Why not? Because as soon as it is caught in words it is nearly always compelled to mould itself into the text’s orientation…

I state (and I sign) that among genuine writers, few are those that take pleasure in writing. And, which is worse, the better the text, the greater the damage to one’s quills, during the process of writing and after, because true literature, in the end, only interests a few. It may have made some writers ‘rich and famous’ but it has never made anyone who writes happy. This is a fact.

Then, why carry on writing? Why does the written image continue to survive, to occupy and to feed people’s minds?…
I believe that all of us possess the faculty, quite uncanny in itself, to perceive beyond the surface of things the absolute meaning of a different, parallel reality. And some of us cannot bear to keep this vision inside them. They are compelled to reveal it. And so they write. It is as being given another life……”